War Between Crete And Athens​By: Sam Gordon
Context Essay
My Story comes in the seventh book of Ovid’s Metamorphoses, and therefore is around the middle. At my point in the story Minos’ son, Androgeus, has just been murdered. As a result, he sets out on a journey to seek revenge for his lost son. They traveled to the land of Aegina to try and convince those to join their side in their fight against Athens. However, they did not want to help him, and stated that they had too strong of connections with Athens and their people. Just after the Cretans departure, Athens sailed upon their shore. Convincing them to join their side due to their sheer military power. Crete and Athens continue on to recruit more allies for their sides until they are ready for war. It is detailed that after four months there has been great amounts of bloodshed. The people of the cities began to pray to the fathers of their cities to not be ashamed, but to rather aid them in their fights. The story concludes with the scene of a feast and the sons of Pallas, attending Cephalus, went to the king. Phocus being the one who welcomed them. At the very last line we see Phocus is grieving for his lost wife. This is how the next story, The Story of Cephalus and Procris begins. Phocus is seen at the start grieving for his dead wife Procris. He basically goes on at the start to retell the story of her death. Now, the story that proceeds mine is called Jason and Medea. The story ends with townspeople giving many cheers for Theseus and his heroics in war. This can connect to the start of my story by sticking with the sense of war and the pride of one’s city. 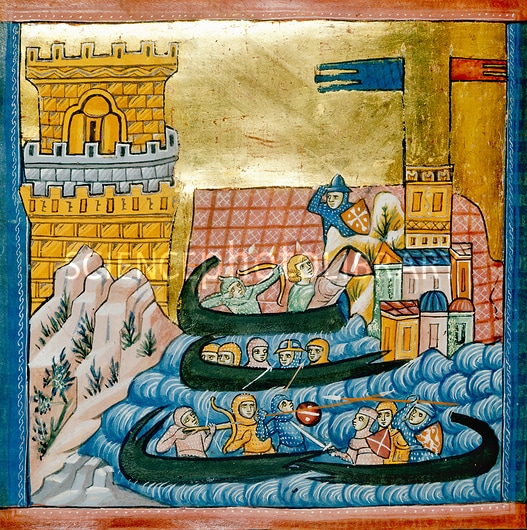 Artistic Essay
I believe that this piece of art reflects the beginning of Ovid’s story where the two sides are recruiting for allies on the shores of Aegina. One of the first things I noticed about this image was the man in blue that stands out in the back. I believe it to be Minos from Ovid’s story, and you can see that he is showing a strong sense of leadership with him being at the very top overlooking everyone else. I also noticed the look of the empire in the background. You can see a large castle that looks to be fairly luxurious. This may be one of the reasons that both the Crete and Athens were striving for alliance with Aegina. By representing their wealth to everyone by sight from the shore and water it can draw attention to you. It also suggests that you have plenty of resources that can be helpful for an ally in war. In the bottom right corner of the piece you appear to have two ships, but they are turned in opposite directions and appear to be fighting. This is a similarity to Ovid’s story in the description of how close the Crete and Athens were to meeting at the shore, but ended up barely missing each other. That is where there is a difference from the original story as the two never actually had an encounter there which is what I believe the image is depicting. On the top of the castle you can see two flags, one pointing to the left and one to the right. The left one is blue while the right one is red. I believe this is a reference to Crete and Athens battling for them as allies. My thinking here is reinforced because at the beginning I talked about how Minos was wearing blue. If I were the artist, and didn’t want people to think that is what the flags represented, I would have changed the colors. It may be just a coincidence, but I still believe they are meant to be the two cities struggle to convince Aegina of aiding them. In conclusion I believe that this image is fairly accurate to Ovid’s story with just a few minor changes, but really gives you a good picture to imagine when reading the story.

​Textual Criticism Essay
One area of uncertainty for me comes when Minos and the Cretans are on the shore of Aegina trying to convince them to ally with them. When compared to the other details of the story it doesn’t make much sense. The Aeginans express that they are already kind of allies with Athens and they have too strong of bonds to break with them. What I have trouble understanding here is that they knew the two were at war, they were already Athens’ allies, so why did they let them remain there for so long. If they really wanted to aid Athens they could have attacked them while they were there to catch them when they were unsuspecting. If I were to rewrite this portion of the poem, I would have Aegina give Crete some sort of threat or warning to leave their city shortly after arriving and expressing their intent. By doing this, it sets up the climax of war and destruction by creating more of a conflict between the two. Instead, Ovid shows the meeting of Crete and Aegina as playing out very slowly and coming to an uneventful ending with Crete quietly leaving their shores. Maybe Ovid wanted there to be a larger sense of competition between Crete and Athens, so he decided to include these lengthier pleas for Aegina to join their respective sides. In the whole view of the story it doesn’t really have that much of an effect, but it could have definitely changed the pace and whole plot even. Especially at the start, but continued throughout the story Ovid gives us a very slow pace to all the events that are playing out. This is particularly disappointing for a story with the word “war” in its title. By creating more aggressive confrontation early on it could have made the story more interesting. But maybe Ovid didn’t want it to be that way, and instead wanted a more slow pace to enhance the decisions made by characters in the story, giving us time to analyze those decisions. We will never know exactly what Ovid was thinking while writing these poems, and all we can really do is guess to the best of our ability.
​